Cheers to a Great Cause

UNDER $20 WOW! This bottle is everything I love in a bottle! The marketing minds behind this brand are spot on. If you look at this bottle and think fresh, refreshing, or peachy, then you exactly on the right track. And if sunshine and beach comes to mind as well, then Living Coral Sparkling Rosé gets extra kudos to nailing the tasting experience just by the look of their bottle.

What I love about the wine

The mission. I love the mission behind the wine! It’s great to find a wine that not only believes or supports a cause, their entire identity is about the cause. Living Coral Sparkling Rosé believes in taking action not just by     donating a portion of proceeds to organizations that help protect and rebuild the ocean’s ecosystem but also by more importantly raising awareness. For instance I love nothing more than enjoying a beautiful sunset over the endless ocean. I love walking along the beach early in the morning. Yet I had no idea that according to Living Coral’s site, “in the past 40 years almost half of the world’s coral reefs have been lost, and without action ALL coral reefs could be dead by as soon as 2050.” My first thought was wow, that’s terrible what does that mean? Well, after a little more scrolling on their site I learned, “Coral Reefs are the ocean’s lungs, helping to transform CO2 into the oxygen we breathe. Coral Reefs are natural barriers against storms, tsunamis and coastal erosion. Coral Reefs provide food, resources and livelihoods to more than 500 million people around the world.” I also learned we are the last generation that help rebuild and save our oceans! 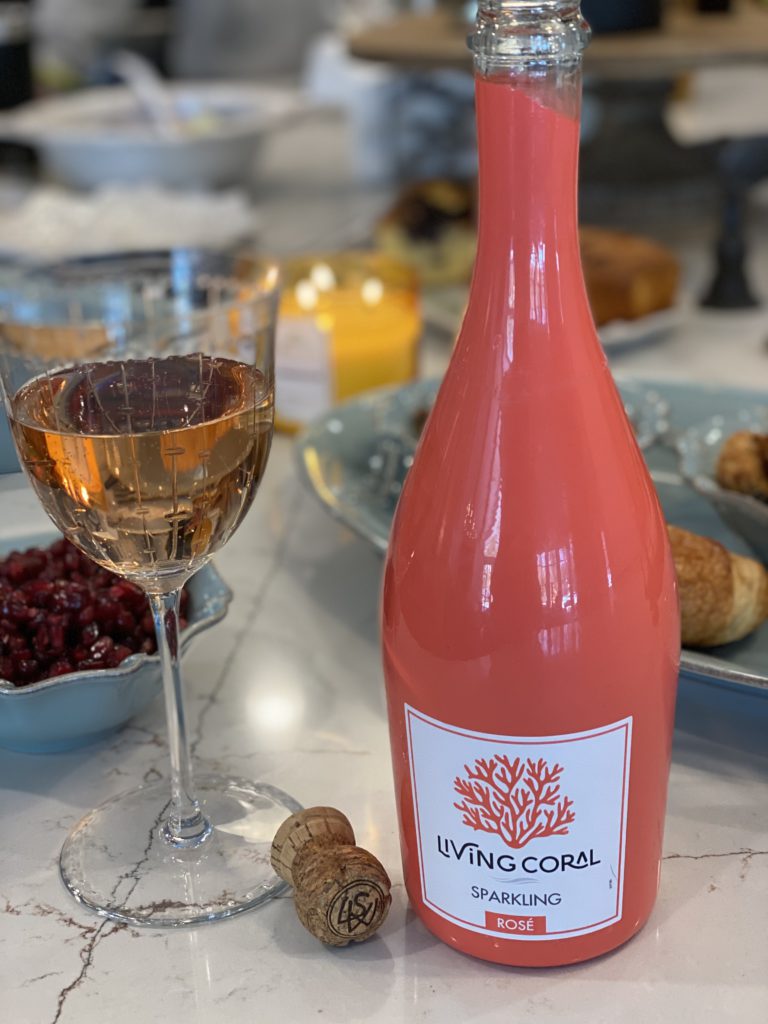 But How Does It Taste?

Refreshing and light. Their is a peachy remanence that is prominent both in the aroma and in the palette. When I first smelt the wine I thought it would be really fruity, I almost thought sweet, like a Moscato. Yet it’s a light, fruity, floral and slightly dry. If you are a fan of Pinot Grigio you will love Living Coral Sparkling Rosé. It pairs well with our brunch spread which consisted of chocolate croissants, dried fruits and nuts, an da spread of soft creamy cheeses. The best part is you can find a bottle of this delicious Sparkling Rosé for anywhere between 15-20 bucks!

Congratulations on the award, it's well deserved! You guys definitely know what you're doing. Looking forward to my next visit to the winery!